There’s the Carneval of the Ascended world event currently going on in Rift and having re-subbed a couple of weeks ago, I did of course jump into the whole affair while trying to remember how to play my old character. Out of a whim one night (and desperation), I decided to use general chat to get some guidance, not expecting much in terms of help on boring noob questions.

I was shocked to be proven so utterly wrong. Not only did I receive a perfect answer within the minute, I received several more tells from different people. My rusty thank-you muscles were sore afterwards. Surely that was first time luck though, some rare cosmic constellation working in mysterious ways! I had to try again.

And so I did, several more times over the coming weeks. Nothing changed. I was never ignored and never met with uncivil tongue though I must have offered plenty of temptation. Moreover, sometimes players would send me tells after 5 minutes, making sure I had actually received an answer to my problem, while a quicker player was still briefing me on more than I originally dared ask for – 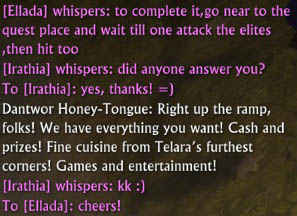 What is it with these friendly, helpful Rift players???

Sadly, I am a complete stranger to this level of support. I gave up in WoW years ago and other MMOs that will even feature beginner channels (such as AoC), were just as big a disappointment. I can only begin to speculate why Rift’s community is so different – is it the cosier size? The numerous WoW quitters? The fresh air in Telara?

….Or do I just happen to find myself on a freak server? Whatever it is, I am duly impressed. Maybe the stars do have something to do with it after all, though; Kleps just ran into an outrageous bunch of Robin Hoods recently, in WoW of all places. If that’s not supernatural, I don’t know what is!