Wolfshead published an interesting article yesterday in which he questions heroism in current, popular MMOs and criticizes the player base’s need to feel like heroes all the time. And I do see an issue with spoiling your gaming audience very much myself; the overkill of things ultimately undermining all their value.

However, if you were to go as far as to say that the player’s wish for heroism in WoW & Co. was wrong or somehow the wrong thing asked of the wrong genre, a detrimental thing even, I would very much have to disagree with that premise. The wish that drives us to certain books or movies, drives us into playing online games too and it’s neither wrong nor sad wanting to feel like a hero in MMOs. In fact I wouldn’t be playing them if that wasn’t part of the deal.

I want to be a hero if nothing else

In one passage, Wolfshead questions the “by proxy”-effect that attracts “normal people” to the more heroic: those iconic, shiny beings that lead seemingly exciting and perfect lives under a public eye, celebrities of all flavors but also countless fictional characters, protagonists of movies, books, comics or video games. Virtual or not, they represent virtues and qualities we wish we had and for a short moment they lend us a little piece of that imaginary glamour which can be addictive enough to turn a fan into a die-hard groupie, following his idol around the globe for 5 minutes of VIP-pass glory.

People cult has always been big for this reason; if you can’t lead a so-called glamorous life yourself, at least you can watch those that do with envy or admiration. Nevermind that other, less presentable side of the coin – the pressure such people bend under, the non-existent social life, the fake friends, the complete sell-out of privacy, the uppers and downers to keep them steady on their feet. If we can’t be shiny, someone has to be. And it better be so.

I’d like to think that I have a good life, a better life in fact than most, no matter how easily forgotten. The fact that I’m writing this article on my internet-blog, in my free time on my warm bed, is testimony to such blessed privilege. I’m also no person for people cult which I find silly regarding celebrities and disgusting in politics, to name two more popular, public phenomena. Maybe it’s because looks rarely impress me and I never feel particularly inferior to or in awe of anyone on grounds of mere social status, looks or titles. While we’re at it: Royalty is a joke. Thanks for listening!

I’ve always had a soft side for fictional heroes though; those had the power to inspire me beyond all limits, be they from classic novels, hero or fairy tales, sometimes even an RPG. I have confessed before how I carry quotes around in my head and how that adds meaning to life for me at times. Yep, I am that normal a person. And if you liked to measure me, then yes I probably have a boring and “uneventful” life. I sit behind a desk everyday, like millions do, I (struggle to) pay taxes, I feed my (lazy) cats. The weekend is the highlight of my average week and if it includes a BBQ with old friends and a good glass of red, I am happy. If my partner still brings me flowers out of the blue after so many years (or remembers anniversaries *gasp*), I am fucking euphoric.

I don’t slay dragons and I don’t save the princess like the heroes in my stories do. I still do the dishes by hand instead of wiggling a finger. And God knows, I’d make for a lousy adventurer – I wouldn’t get through the first wood without hopelessly getting lost (been there, done that) and I’d be halfway through my provisions by noon. So just sometimes, I wish I was a bit more like my heroes; a little bit more than myself. Sometimes I long for the epic and magical in my everyday life. And you know what: that’s okay. It’s neither sad nor “desperate” – it’s just life. Unpretentious and real, Mr. Thoreau. That doesn’t make it any less of a life, maybe it just makes me honest a person. 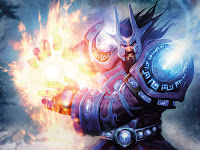 …That’s why we love stories and lose ourselves in them, that’s why we get absorbed watching the Lord of the Rings for the 10th time (extended), that’s why we play mighty warriors and dark mages in games: it’s called escapism. Mankind has done it for thousands of years, in furs, on smokey incense, with bone and dice. So yes, I want to be a hero in my MMOs; I don’t want to play accountant and write reports with my pen on planet reality. I want epic skills, I want to be powerful and kick some magic ass with a flaming sword!

If I can’t be a hero in a game I play so utterly, what’s the goddamn point???

There’s an article I wrote some time ago, early into this blog, that I keep coming back to like a broken record (I apologize at this point). It’s the never ending story of game difficulty level vs. meaning in MMOs, cost vs. reward and how they are opposites that rely strongly on each other to survive in perpetual balance. Hard-won victories last forever – easy rewards mean little no matter how purple they are. There is no adventure, nor real heroism where there are no struggles and challenges to face; your book’s protagonist is hardly a hero if he has no fears and demons to overcome, no dragons to slay.

And this is where me and Wolfshead agree completely: the doom of easy and numerous rewards in this genre we love so much, the loss of depth, adventures and stories because we get fed so much candy we lose all tolerance for downtimes , for exclusive content with high requirements and earning our passage. Along with that, a sort of baffling player self-entitlement, no doubt bred in MMOs like WoW that have overdone it on access, balance and fast rewards.

I don’t think that wanting to be a hero in games has any part in these issues though, I really don’t. In fact, I’d turn the table and say that it’s exactly because of this excess that there can’t be any heroes in today’s WoW (as opposed to there being superheroes everywhere) and that’s what’s leaving so many players feeling slightly unfulfilled – how could they not be in the absence of hard requirements and obstacles to make for such a title? It’s really hard to be a pioneer under such circumstances. And that’s what actually makes me sad and desperate.

In the end I’d rather be me

We all long to be a hero at times. Maybe we even wonder: if life ever gave us the chance to a moment of lasting pathos, would we be brave enough? In video games and MMOs especially, that are so much about escaping, adventuring and immersion, we get to re-invent ourselves a little and unlike to just reading a story, we get to be interactive. Our real lives might be “average”, but in Azeroth we hurl firebolts at our foes. On our way to work, we cringe at our reflection in the morning mirror, but at night that elvish cloak and sparkling armor sit just tight. 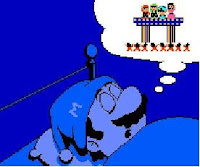 And I know, I might never write that novel that keeps robbing me of my sleep. I might never be able to afford that fairy hut or spooky castle I would call a home. And I might just have to accept one day that neither love nor friendship are as perfect nor epic in this life as they always are in the best of stories, the ones which spoil us so utterly with hopeless ideals early on in our lives. And just maybe that’s a good thing too; because the epic and tragic lie close together and usually come at great cost. Just like heroism comes with high risk and hardship. We are not always ready for what we wish for.

Just maybe, a normal, “uneventful” life is not so bad after all. And being that hobby hero at night – in virtual worlds where death isn’t permanent and dragon’s breath is made of pixels. I like things that way.