So I picked Allods Online up again the other night because that’s what we do, me and Allods have this steamy on-and-off latenight relationship. The game has changed much since last I played it – there’s been the Game of Gods expansion this February 2012 and the look of the game has improved in every aspect. Allods has always had great characters and customization, but now there are more choices and oh my god the bard class! That’s right, you can now play a BARD in Allods! I haven’t had much time to level one yet but apparently the class mechanics are somewhat similar to the bard class in Rift.

Personally, it makes me happy to see that Allods is still alive and kicking and that Astrum Nival were able to launch a full expansion stuffed with shiny new content. The game has always been described as shameless WoW clone, mostly due to its similar cartoony graphics, and no matter for how long dedicated Allods players and fans have been working on dispelling that notion, the comparison stuck to this much younger Russian MMO like duct tape from hell.

Let’s look at this just briefly. Yes, Allods looks like WoW at first glance. Yes, it also pretty much adopted the questing system and the talent tree isn’t all that different. The zones are a little empty here and there despite looking nice. Combat works different from WoW in certain aspects, for example there are pre-charged attacks and no auto-attack. Experience gain used to be fairly slow but over the years the developers improved the system several times to make both combat and progression feel smoother. Also, Allods is a free-to-play which means RMT is part of the deal and a very stylish item shop is an integrated part of the game – which doesn’t mean you cannot enjoy this game without spending money. I do.

Other than that? Allods is awesome. The overall graphics are much sparklier than WoW’s. The polish, music and performance have always been top notch, especially for an FTP. Races like the Arisen or Gibberlings are legendary. There is quirkiness, humor and atmosphere in the world. There’s also the rather refreshing Russian flair which shows in some of the NPCs or cities. In short: Allods doesn’t feel one bit like WoW and from what I know about endgame, it is a different game entirely (there be lots of war ship PvP up in astral spheres!). If you’ve got any spare time to dabble at some free games, don’t skip Allods.

One thing I’ve not mentioned yet is Allods’ armor and how that too has taken a massive step up since I played it last. Now, if you’ve got any love for the eye candy, customization and gear in MMOs, you will love this game. If anyone’s going to emulate WoW’s graphics, they should at least do better than WoW in the armor department – and Astrum Nival have. You want wicked armor? Allods has it! I browsed tons of high-level gear and tier sets and was dazzled by a flamboyant carnival of colors, fabrics and quite possibly the greatest cloaks ever! If you’re going to pose in your shiny epics, it better look like this:

Like to see more? Fear not, I finally added an Allods gallery. I need to highlight my favorite piece here though because….whoa – this gotta be like the greatest, badass look ever:

I named this guy the Scarecrow and if you’re still wondering what he’s got on his back, that’s a wooden box (I bet full of torture tools). And there’s a black raven perching on his shoulder! Amagad! *worship*

Thus hunting down irritated high-level players for screenshots, I came across a chapel the other night and found this: 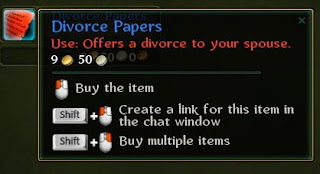 I’ve certainly heard about MMO marriage before, wedding bands and ceremonies and whatnot, but divorce papers? Now that’s new. I started digging a bit and it turns out Allods Online has possibly the most intricate and complex marriage and divorce system of them all. And unlike so many other games where the union of two players is merely symbolic, marrying in Allods comes with a list of special, spouse-related spells and abilities to give the relationship more meaning. Getting married isn’t quick and neither is getting rid of a spouse – so hedge therefore, who join forever!

For those of you who prefer a TL;DR version of the above link, I’m going to highlight the few most remarkable points about Allods’ marriage system:

One must wonder what exactly that champagne bottle is for! I think we can agree they do take their weddings seriously in Allods (is there any MMO that comes close?). And a system that comes with bonuses like this may well appeal to a wider audience than just a roleplay corner. To me personally it’s a fascinating approach and illustrates the many depths of MMO dynamics that still haven’t been explored fully, by a wider range of titles.