Yesterday, Rohan tried to put a finger on why Wildstar isn’t doing so well only 3 months into launch. Wildstar the great AAA-hope of 2014, the polished, cartoony WoW-esque holy trinity, theme-park MMO that appeared different yet similar enough to accommodate the mainstream. I agree with Rohan that WS has a higher difficulty level than WoW, although the leveling process never struck me as hard or tedious on my Esper. WS is packed with some fun quests and a very linear, well-paced progression to level 50. I’d happily place bets on FFXIV:ARR being grindier than WS, only FFXIV is so fortunate to have a faithful, asia-based community on top of all the western influx since revamp.

However, it’s true that WS dungeons are tough and by the looks, raids even tougher. Even if you’re not after the attunement, bronze runs are a tricky to pug. That said, I don’t think endgame is the problem either – at least WS has an endgame that poses a bit of challenge and brings guilds back to the table. What does GW2 have? No endgame, failing guilds and not even great housing. Somehow, there’s always something to complain about. 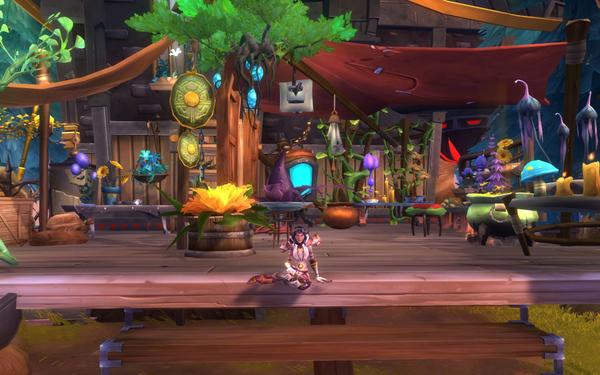 My veranda in Wildstar.

I’m not convinced anymore that WS would be faring better if endgame was toned down to accommodate pugging. What I will say is that like ANet before them, Carbine took their good time to fix long-standing player concerns as far as the UI, submenus and other optimization concerns went and they are still far from done in my book. I personally know three potential subbers that still cannot run WS smoothly on their machine and have therefore given up playing. Then there’s players like this one who believe Carbine aren’t doing such a great job in marketing their title to a wider audience – but how big an issue is this, really?

Maybe it’s just that simple: WS isn’t WoW just like none of them are. And we have crossed the notorious 3-month mark. The dwindling player base was to be expected. Today’s MMO market cannot reproduce the successes of WoW, not with titles that are “similar enough” and not with titles that are completely different or exactly the same. Even if you own a niche like EVE does, you need to content yourself with 500k subscriptions. And while some WoW attachment still lingers on and declines only gradually, the rest of the market must cope with grazers and players opting for f2p or b2p over subscriptions.

Wildstar is a fine game. It can’t be helped that it wasn’t released in 2004. We’ll see if mega-servers are a blessing or curse for its core community. Maybe it doesn’t matter either way.