Have you ever felt like a complete fraud while playing an MMO? As if you were the world’s biggest newb, way behind and knew nothing about this longtime interest of yours? That’s a bit how I’ve felt ever since playing Lord of the Rings Online. What on earth was I thinking not playing this sooner? What’s wrong with me?? Sigh.

I can’t turn the clock back and maybe it isn’t always the worst thing to let an MMO mature before jumping in. Still, I find myself baffled at how great a game LOTRO has become while so many of us were busy playing WoW, Rift and other titles, probably thinking this Tolkien-inspired soon-free-to-play game couldn’t quite cut it. How wrong I was.

Ever since, I’ve been trying to put my finger on the magic that makes LOTRO. By now I can say it’s possibly the most atmospheric and immersive MMO world I’ve ever traveled. This isn’t hyperbole; I wish I could say WoW had been as good at selling the experience – or Final Fantasy, Age of Conan, Rift or Guild Wars 2. But even that last one cannot quite compete and it’s not about the graphics. Tyria is the most visually stunning world there is. But Turbine’s Middle-Earth does something to the senses none of the others do – so well, you are willing to ignore other undeniable shortcomings. What’s going on here?

The Sound of Magic

Simply put, it’s the sound. It’s the fabulous sound effects in LOTRO that make it that much more immersive compared to other MMOs. It actually took me playing this game to realize something fundamental about us as human beings: just how much of our processing and understanding of the world around us relies on sounds. You will raise an eyebrow now, thinking “well of course, duh” – but think about it! We’re one of the few species that value their eyesight before all else. We’ve shaped our entire world, our society and culture around the function of our “first sense”. We live in a very visual world where we constantly judge how pretty things and people are. We are untrained and crippled when it comes to our hearing capacity. The experiences and sensitivity of blind people fascinate us.

And yet our brain registers, records and categorizes sounds nonstop without us realizing. Hearing requires no conscious effort; it happens in spite of us, there’s no closing our ears. Because of that, sounds are closely linked to everything we experience in our lives, even if we don’t know it. They are a constant undercurrent, the way smells and odours can be. And like those they can trigger emotional responses and memories.

“Half of the world building in MMOs relies on us completing the picture with our own mental imagery. It’s when the real magic happens – the alchemy.”

We know how a river sounds or wind howling around a corner. We know the tune of morning birds compared to evening birds. Most importantly, we know how places sound; it is not enough to add a soundclip or two to create a virtual environment. It takes an entire orchestra to create that real sense and association with “world”.

We know how a forest sounds. A beach. A farm. There’s cracklings and rustlings, whistling and jingling, huffing and puffing, japping and blabbering all simultaneously coming from different directions and sources. Plus, that sound canvas changes constantly as we move around. Our world does not consist of static, isolated sound bites. LOTRO captures that.

The Sound of Bree

The first time I rode my horse through the town of Bree, I was delighted at the “sound” of it; the low muttering, combined with jingling harness and the merry clap-clap of hooves on cobblestone. Around us, the town added its very own tune to the melody: carts being pushed around, NPC chatter, hammering, bells, fountains, birds in the blue sky above. Different sounds and noises around every corner. It was overwhelming authenticity. And oddly soothing.

That’s when it struck me: this immense, untapped potential that is sound in most MMOs. Not ambient and background music, as much as I love those too – but intentional, planned out and distinctive sound effects and “maps”. Whenever I approach a swamp or forest in LOTRO, I am already looking forward to the multi-dimensional (or -sensual) experience. Amazingly it carries even further: thanks to the quality of sounds, I can actually smell the forest in LOTRO. That third sense, forever out of a videogame’s reach, becomes tangible. The audio and visuals create such an impact together that my mental memory of forests triggers an idea, a hint of typical forest smells. This is truly powerful stuff.

Middle-Earth is the most authentic and plausible MMO world imaginable. You could attribute that to Tolkien’s legacy, the detailed lore, yet bringing that to life in an MMO is no given. It’s just as hard as world building is for all games. And yet the answer seems simple: making use of your player base’s mental triggers and associations. Taking lessons from how we process real world and translating that into game design.

No matter if an MMO simulates real world environments or more fictional, fantastic places, developers should take LOTRO’s example to heart; game worlds are as much about distinctive sound/noise compositions as they are about landscaping, zone design or sophisticated weather effects. Make your trip as multi-dimensional as you possibly can for biggest impact.

I would never want to miss this focus again in any MMO. Already I dread future comparisons. And yeah, LOTRO could do with better character models, a UI revamp and a complete questing and combat overhaul. But oh the sceneries, the travel and the sound effects of LOTRO are a one-of-a-kind package most other MMOs can only dream of! For those who have eyes to see. And especially ears to hear. 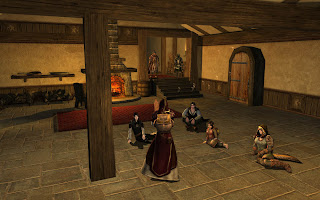