(This post is dedicated to all the happy gamers out there. And the unhappy ones.)

I have one more month to go at the current job, much to my great delight. Imagine my surprise then when today, somewhat late, I discovered a distant co-worker talking about his WoW raiding spree some years ago, when he was still a progression raider on his horde shaman. Unfortunately however, WoW had “gone wrong” sometime after WotLK (which is true of course) and so he stopped his raiding career of many years and approximately 172 days of total playtime. What a familiar story.

However, my initial fuzzy surge of ex-raider fellowship was short-lived; three minutes into the conversation, the topic shifted to what an utter waste of time it had been to play as much WoW as he had. How could anyone in his right mind spend that much time on games? And with nothing to show for after such a long time? Never ever would he do anything like it again.

Of course! I can never be that lucky….after all this workplace just sucks in all respects!

From there this guy went to explain how he’s rather playing online poker these days and earn some money – because that activity at least has some financial upside (and hence must be utterly worthwhile compared to playing silly fantasy games). Of course my mind was reeling from all the familiar, hollow argumentation at that point, but what struck me the most about this person was the way his enthusiastic flashback of past WoW days turned into such a fundamental condemnation of the once cherished pastime. His eyes had been shining brightly thinking back on his raiding career. There was grim pride in his words when he clarified he’d been one of the “real raiders” on a popular German progression server. Not to mistake with one of the casual crowd! He had killed Arthas on 25man and more. He had “had everything”.

And quite obvious to me, he had enjoyed that greatly. To such a point, a distant shadow of that past glory was still surfacing on his now frowning face. And yet, somewhere along the line that same mind convinced itself that it had all been worthless. An odd ambiguity bespeaking a battle between feelings and reason.
I was just waiting for him to say it: how none of us wish we had played more videogames on our deathbed. At least he spared me that particular cringe.

What none of us wish 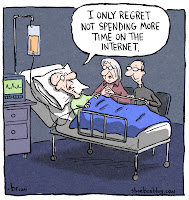 Besides the obvious thing, that there’s an awful lot of things we won’t be wishing for when facing death one day, no matter how much we have done them, the truth is most of us will never ever find ourselves on that proverbial death bed. You know, that peaceful and solemn end-of-days contemplation as we feel the last flicker of life leaving our body. That perfectly timed moment of retrospective. And even if by some chance we did, we wouldn’t be thinking of having played too many videogames; in fact I have this wild hunch we wouldn’t think about games at all. This entire analogy isn’t even a thing, it’s nonsensical and construed. Anyway.

Sometimes I still wonder, in a brief moment of desperate frustration, how long is it gonna take? How much more established do videogames need to become in contemporary, western culture to be regarded just as any other hobby out there that isn’t necessarily making “financial profit”(?) That isn’t productive on a first-glance or physically tangible level (tangible on many other levels though). Heck, some hobbies are actually downright detrimental to your health and wellbeing and even those are more accepted than gaming. It’s nuts.

Not to mention of course all the upsides and benefits of videogaming as a hobby / passion. So often documented by gamers out there. Again and again. I’ve talked about it myself, At least twice. I don’t feel the need to revisit this topic. By now there’s a multitude of studies and hard facts out there on all the things that gamers are better at, from hand-eye coordination to abstract thinking, from organizational to certain social skills. And then, in case you missed it in 2012, there’s pieces like this one that actually deal, literally, with the deathbed fallacy in context of videogaming. Yeah, it’s McGonigal again – she’s an enthusiast. And she has a point.

So, in case you still detect yourself in that thought process sometimes, privately maybe as you ponder how much “greater you could’ve been without videogames”, how games stifled your growth and progress in other areas when they’ve really just been an excuse from yourself, saving you from self-doubt and the realization that maybe you’re not going to be a big world changer, internationally acclaimed author, scientist or designer after all – here’s a short transcription from McGonigal’s 2012 TED talk:

“Hospice workers, the people who take care of us at the end of our
lives, recently issued a report on the most frequently expressed regrets
that people say when they are literally on their deathbeds. And that’s
what I wanna share with you today, the top five regrets of the dying:

Now, I don’t think I need to further comment this list. I only wish you do yourself a favor: take it to heart. And while we’re at it: do me a favor and spare me from your goddamn gamer’s remorse.
If you feel the gaming blues sometime (I have), take some time off! If you aren’t enjoying games anymore, don’t play them! If you feel you’re spending too much time on games, play less games! If you feel you’re using games as an unhealthy outlet, ask for help.

….but spare me and the rest of the happily ever after gaming crowd. Spare me the underachiever complex and lamentation of failed grandeur which you so graciously bestow on everyone around you in one sweeping, condescending blow of rotten hindsight wisdom. I think videogames are fucking great – they have been for the past 28 years of my life! That’s for how long I’ve been playing them, so I think I too know a thing or two about the subject.