Disclaimer: This is officially not a hype post. Why? Because GW2 is out now! Lalalaa.

After launching three hours early (and me being in two hours early), GW2 was off to a rocky start yesterday noon when the EU servers suddenly kicked out everybody and went dead for three full hours. That makes me think that cannot have been coincidence – maybe the three hours early start anticipated what was to come? Just kiddin’…

Anyway, the day still ended on a very high note for me after ANet fixed the server hiccups. Many of my own impressions are resonated in Pewter’s current list of thoughts, particularly what she says about not feeling alone but part of a bigger body that is all around you. Games like Journey prove that the feeelings of togetherness an cooperation are not created merely by speech/chat. Since players do not rely that much on chat during questing, they actually start minding each other more directly and proactively; my partner pointed out how for ongoing events, even large groups would stick together tightly, keeping up coordinated formations. I find myself frequently hovering over players killing tougher mobs, just to check for their healthbars (wtb HP display here). And even when the big ass giant in Nageling wreaked havoc on an army of 50 players and I died instantly like a noob, not one but four players came to my aid! This is GW2’s cooperation – day one – for you.

Besides that. I will follow my blogging neighbours’ example in posting a few quick first day tidbits:

So much for the first day and I sincerely hope that ANet will be able to solve the current issues swiftly for all you official launch date folks out there! More juicy GW2 impressions from me next week – I have a game to catch! Happy Sunday! 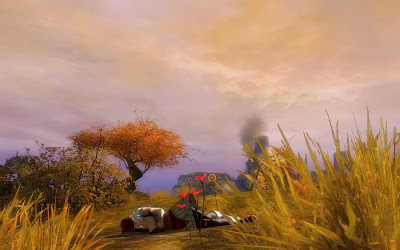