As video gamers we are living in wonderful times. I guess few decades from now some child of the future will smirk at this as he waves away a hovering NPC hologram with a sweep of his hand. Still, we are privileged in this time, too – to witness the speed of progress, the giant leaps technology has taken since our first 8bit steps until today. Video games are beautiful and there are more and more special and weird gems surfacing as developers get bolder and the audiences grow.

Nonetheless, games or rather experiences such as Shadow of the Colossus, Limbo or Bastion are preciously rare. You really need to be on the lookout and it appears that we are actually in for another treat.

“Journey”, out this March 2012 on PS3 network, promises to be everything that can be expected of a true video game delicacy. Set in a strange desert world of soft pastels, its unique graphics and smooth effects are a sight for sore eyes. Like for Limbo, there is no music in Journey and the player is cast into a strange setting without preamble, without map, unaware of what the actual “goal” of his adventure might be. And so he starts traveling, ever forward, exploring and solving curious riddles on the way by aid of visual hints alone. 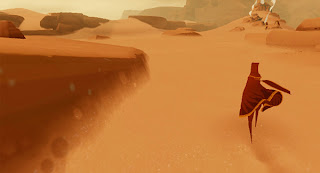 Maybe the most remarkable thing about Journey however, is that it’s actually played online – and there’s a real chance to meet other players in the middle of the desert. Strangers you will never know, strangers you cannot speak to and yet –

While traveling the player can encounter other players, one at a time, if they are playing online. Players cannot speak to each other, but can help each other in their journey or not as they wish. Players met online will not be identified with a username and voice or text communication will not be possible with the other player. According to designer Jenova Chen, “it’s about two strangers who meet online. They don’t know who they are or how old they are. All they know is, that is another human being. “The only way players can communicate audibly with each other is with a wordless shout. Players will have symbols on the front of their robes for identification, so that the player can tell whether they have met that traveler before or not”[..]

With that bit of information, Journey has reached maximum appeal with me. It appears that for a while the folk at IGN struggled for words too trying to define what this game actually is, y’know definitions (the final IGN review is actually much better). No matter what you like to call it, an “acid trip” as suggested, a poetic experience, a mad ride – maybe the point about Journey is that there’s no “point”, other than that:

The journey is the point.

A title worthy of some attention, methinks. Now all I need is to borrow a PS3!