I’ve come to a conclusion (drum-roll): the vast majority of all MMO players out there today are not in fact MMO players. Even less so MMORPG players. That’s right. We need a new name, more than ever.

What caused this insight? It’s not so new – in fact I’ve asked for a change of name-giving before. In the meantime though, things have moved on from there with considerable speed. Or as the Dude would say: “New shit has come to light!”

Two cases against the “MM”

By now, the “massively multiplayer” label is a complete sham; a false premise, an empty promise. Think about it: what is the maximum of players you actually share your time with when online? When you run dungeons, how many do you need? 4 more people? 9? And how many friends have you made online the past 5+ years? With how many people do you effectively have regular exchange in your social group, guild or band of brothers?

A massive amount? I doubt that very much. If I think back on my time in WoW, some 6+ years of raiding, I have spent 95% of my time with the exact same 10 people. I don’t remember any fleeting acquaintances, I certainly don’t remember anyone from my friendlist that I stopped using halfway through TBC. What I do remember though, is all the downsides from playing on big servers: the headache to choose a guild or recruit, the over-camped outdoor bosses, the cringe-worthy general chats, the awful anonymous PUGs. Oh, there was quantity sure – but quality?

My recent thoughts on Skyrim and player-hosted servers has brought me to an inevitable bottom line: Online games don’t get better with bigger servers. Opportunity does not equal the need to play with others, nor does it improve matters for the individual player after a certain number and size. What is the effective difference between an online server with 50-100 players who play cooperatively together, know each other, benefit from more available space and resources and a server of 100’000 people? Wait, I know – the auction house. If a convenient economy is the only up-side, then I believe I have made my point. Any MMO player currently out there who is dreaming of the immersive experience, the role-play, the simulation, the story, the building of community down to player housing and whatnot, would be better off on a drastically limited size server.

My second argument against the “MM” in MMO is influenced by the current trend we can observe in popular games like WoW or SWTOR: NPC companions. Tobold draws a particularly dark image today of the future raidguild that hires bots rather than people for crucial raid spots. Maybe even most raid spots. Who needs flawed human beings when a program can do the job much better? What will happen if NPCs do not only look, talk and follow you like a best friend, but get an AI to out-perform even the best player? 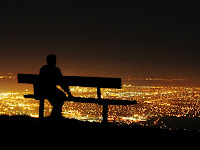 The cooperation factor in WoW took a massive hit with the introduction of the anonymous dungeon finder. Already now, many players spend most of their online time solo with a companion pet by their side, doing the odd 5man run with mute strangers from a different server.

Are smart NPC companions the next step in the MMO-evolution towards player isolation? Like the vast cities of man where every individual sits alone in his apartment at night, tragically independent, surrounded by baubles and clutter?

Not so “RPG” either

Whether it’s MMO, MMORPG or online RPG – terminology has been in disarray for at least 5-10 years. The more online has entered the world of gaming on every conceivable platform, the more you could hear the term “MMO” used, misused or mixed up in various context. Frankly, I am not sure I know anymore. Anything since UO that has looked remotely like WoW has been called MMO, even Call of Duty and League of Legends are obviously online, cooperative games – just not the kind classic MMORPG players (who don’t exist by now) used to refer to.

It’s the same with “RPG”; less than ever does role-play actually define the MMORPG genre. What does role-play mean? Is it just to play a given character and control him, or is it to invent your avatar from scratch, to add a past, history and personality that defines him? Is it to be completely in character (and have the tools and means to do so) or to at least act in a way that is consistent with the setting and world you play in? If not, then any game where we just “steer a hero character”, Mario Brothers included, is a role-playing game.

…What makes WoW an RPG? Or is the online component maybe by nature an enemy of immersive role-play?

At this point I realize that I have completely disintegrated an entire definition and from there a genre I happen to love. I’ve stripped it, reduced it, lost it. One letter is all that’s left to me: “O”. That’s all I’ve got for you, one stinking letter! That one is a dime a dozen; the future is definitely online. I’ll happily invest in online shares.

As for the rest – it lies in darkness, doubt and uncertainty. Change can be a good thing, but I’m not sure I’m ready for too much change and re-definition. I can see the nice features along with the new….yet all the while I keep thinking that I really just want my rug back (peed on or not).