My old friend Cyrille is quite possibly the most dedicated, passionate retro-gamer I will ever know. Before he made his ultimate dream come true – moving to Japan, that mother of artsy videogames, manga and anime, and falling desperately in love with a girl there who is now mother of his son – we grew up together for a time. Cy was a PC Engine (aka Turbo Duo) worshipper down to the bone, with presently 688 out of a total of 735 games owned, and I don’t think he ever eyed any game past the 32bit era with anything but disdain, which made for both entertaining and infuriating discussions sometime. “Video games are works of art” he used to tell me, anything less was not worth his time. He wanted to see love and great care put into them by developers, love for a synthesis between story, graphics, soundtrack and theme, care for the little details that stick in our minds forever. We would watch game intros in solemn awe together or listen to wacky game midis as if they were Beethoven’s Fifth. Truth be told, my cellphone’s ringtone and sounds are still SNES midis – there’s a lot of nostalgia involved.

Why do people play video games? Plenty of reasons there: entertainment, challenge, competition, winding down, the social / cooperative factor, escapism, yadda yadda. Most of these things can also be found while having drinks in a bar or playing poker with friends though. Being into video games goes a bit deeper in my mind, although I am aware not everyone shares the same interest as me. But it’s always annoyed me how anyone into literature, painting or music is automatically a fine “art and culture” lover, while being a gamer gets little to no such credit. Video games are two steps away from movies and TV, with a big fat label saying “passive and unproductive” on the package. Being into teh arts however, is enough to make you seem distinguished and productive. You might not play any instrument yourself or ever have held a brush in your life, still: you = creative!

Well, I have some news: video games are works of art. Video games are beautiful. They’re not just moving pictures stirring behavioural principles to enslave people into passivity forever; they’re the joint product of a hundred art departments come together. Years of meticulous planning and execution, a delightful composition of graphic, music, story, coding and heart. The work of outstanding artists, visionaries and dreamers, appealing to several of our senses simultaneously. If you have a good look at some MMO and general game sites, forums and blog discussions these days, you get the impression that many gamers have forgotten what  they are dealing with. Debates on subscription models and numbers, launch dates, developer vs. publisher wars, playtime, class balances, server and credit card crashes, bargains on collector’s editions. Very little on the art that is games. Very little delight about the concept art, story or music involved.

Has the audience gone numb, deaf and blind or are today’s games simply such cheap creations off the same careless, fast-producing clay, that no appreciation for more artistic aspects is possible? Or is there an ongoing trend in the videogame industry to get closer and closer to movie making, as this author states in his lenghty but interesting article?

When games are works of art

On my recent search for more old-school adventure games, I’ve stumbled into a world that I had not visited for a long time. I’ve asked around for recommendations quite a bit, not just on my blog, but some game forums where I have been resident for many years and people know my tastes quite well. I knew Monkey Island and Siberia were a good starting point – point&click and puzzle adventures in general, as long as they emphasize story and setting over tedious, endless riddle guessing (which I hate) and jumpy acrobatics. I excluded MUDs because I am still looking for the video in game (still, thanks to Jaedia for this recommendation!).

What do you know, I got a lot more feedback than expected. And not just that: I got my finer senses back for what I truly appreciate in games – the scary, the hilarious, the atmosphere. It’s true, a lot of today’s videogames have dropped off the same bandwagon and they are not meant to last; but there are the daring and different still. 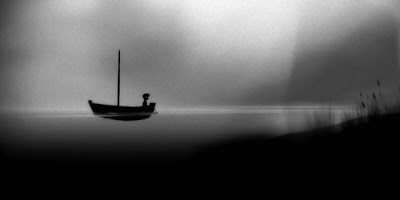 One such game that I need to highlight is Limbo (XBOX live arcade, 2010) which has been the biggest surprise to me of the suggested lot – being completely without music (there are sounds though) and text. It is the most unsettling, creepy yet beautiful game I have encountered in years. A boy lost in an deep forest where death is as imminent as the sky and yet as quiet as the wind whispering among the trees. If you hold any love for dark fairy tales and a fascination for the subtly macabre (hello Neil Gaiman readers), Limbo is an absolute delicacy on grounds of imagery and atmosphere alone. It is such a breath of fresh air to find such indie projects still being produced, but judge for yourself.

Videogames are an art form made up of visuals, sound, and a mysterious little something we call gameplay. Limbo is the perfect example of these three crafts working together in harmony to create something astounding. With no text, no dialogue, and no explanation, it manages to communicate circumstance and causality to the player more simply than most games. This 2D puzzle platformer in a film noir style is one of the best games you’ll play this year on any platform. (IGN.com)

Often compared to Braid, I’ve not found the second, very jumpy puzzle game nearly as compelling in terms of atmosphere or gameplay (also, I find the protagonist Tim annoying). Braid has won awards for beautiful artwork and innovative design though and is clearly another pearl in that corner of the genre.

Parallel to Limbo, I have engaged in Monkey Island, re-mastered. After only the first chapters (and some awkward sparring rounds at the weapon master), I noticed my saved gamedata at 40%. I had to smile at this: yes, games used to be this short. Of a great adventure like Monkey Island, you could expect a run of 5 hours max. Today, you can hear people complain if a videogame “only offers 30 hours of gameplay”. But on to some more pearls…

As I hadn’t specified platform, only excluding handhelds (mostly because I have played all the good ones on DS already), I was surprised to get some flash-/browser games on my list. They’re full of love for detail, featuring beautiful tunes and engaging gameplay:

If Samorost’s style rings any bells for you, the games are in fact by Amanita Design, the studio behind the delightful Machinarium for PC, PS3 and Wii. A demo for the game can be found here.

Realizing I am now completely leaving the world of adventures, I still like to mention an old, secret fandom of mine, the Orisinal mini-games by Ferry Halim. The page has been there forever and is not being updated very often, but each game is a little wonder of its own (I particularly like the star girl and dragon flies).

Shinies and oddballs aside, my list of more classic text adventures has grown too. To name a few that I intend to look into: Indiana Jones, Broken Sword (1-3), Discworld, the King’s Quest series, Lost Horizon, Zak McKracken and Gray Matter. For some reason I couldn’t help but feel reminded of the upcoming MMO, the Secret World, when checking out that last title.

I have also been informed that there’s a rather in-depth guide to classic adventure games available on Amazon; I’m sure that to sworn genre cracks such an encyclopaedia provides a great read. Also, unrelated to the topic of adventures, I found this article on artful videogames well worth reading. I can only second the sentiment on Ico and Shadow of the Colossus.

I shall be entertained by this list of adventure games for some time to come, methinks – enjoying their stories, music and world. I dare say, it’s quite the rest and relaxation compared to what’s going on in other corners of the world of games right now.