Dear player: it’s time to remove the keys you enjoy so much, because let’s face it, they serve no purpose anymore besides a symbolic one.  Games are not about symbolism, memories and emotions, this is SRS business. And it saves space on your bars.

We’ve removed the shiny gear and baubles you used to acquire by battling adversaries. It’s not practical. Instead, your rewards are tokens for everything. The tokens all look the same and they aren’t even real tokens, but numbers on a list – we know that’s not very exciting. But it makes loot distribution more even. Less waiting for you.

We removed the requirements for that instance, by the way. No more attunement to proceed. Plus, you can solo the chain if you’ve no patience for a group.

Please note that because of all this, we don’t have enough content since yesterday. However, we really don’t like to see you waste space or time on anything, so we’ll help you save on these things. We don’t know what you’ll do with all the excess, but we are sure you’ll think of something. We want you to be happy right now, not tomorrow.

Cutting out the real thing

So many things have become a currency in MMOs, a substitute; a token, an achievement, a note in the database. Why carry keys when the system can just record an achievement. Why have actual treasure to loot when you can take flexible tokens to shops later. Why carry spell ingredients in your bags, why travel somewhere to enter the instance gate, why visit an NPC in the barracks to join a battlegroud. Why indeed?

The glory of short-cuts

“Two roads diverged in a wood, and I took the one less traveled by. And that has made all the difference.” [Robert Frost]

Sliding doors; an intriguing concept. Playing the mind game of “what if” – what if you had taken that other road, where would you be now and who? We’ll never know and most of the time, there won’t be second chances. But I believe that while short-cuts can be handy, they rarely make for the better story. In fact, let’s try an experiment. Or two.

Which one of the two pictures does appeal to you more? Which one sparks your imagination? Where would you rather take a hike? 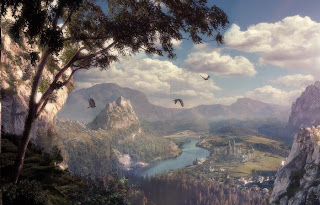 Your way to treasure: Through that dark wood, down the steep hill. Wait for a boat at the river. Head for the city, convince the guard to let you in. Get some flint and tinder in the shops. Camp close to the distant mountain range. Only a little further from there. 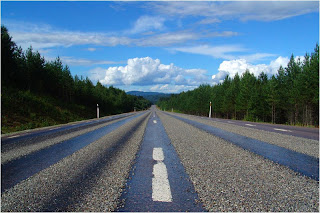 Your way to treasure:
Just follow the road, you can’t miss it.

#Day 1a) in an imagined person’s diary –

“I got up this morning and made some pancakes. When I spilled the milk, I discovered my watch lying under the table. I would have looked for that forever… I got the letter you wrote in the morning mail. The pages smelled of you. On the way to work, I bought a newspaper at the kiosk. There was a little boy who kept smiling at me through his huge tooth gap. When I left, he waved at me winking slily. How odd. Because I was musing over that boy, I missed the bus and so I walked to work. On the way I ran into my friend Val. We had a laugh over this new show we’re both watching and he invited me to dinner in the evening. When I arrived at work, the meeting hadn’t started yet. We were still waiting on the secretary which is why I had some time to get another coffee.”

“I got up this morning and ate a pop-tart. Checking my iPhone, I saw your Email, thanks for that. On the way to work, I listened to the news on shout-cast. I noticed there was a traffic jam on the bus lane, good thing I have my car to get to work. When I arrived, the meeting was about to start. The secretary had not arrived yet, but we decided to get going anyway and just include her over voice conference. That’s when I realized my watch was gone.”

On life; real and virtual

Short-cuts are faster, more efficient. Maybe they get us straight to where we want or at least, to where we think we want to be. But they also rob us of opportunities; of the opportunity for life to step in and trigger a chain of events or add something unexpected. Many good things in life, surprises and chance encounters happen while we’re not on plan, not on time. They happen while we’re waiting. They happen on the side of a winding road. They happen because we got distracted and our eyes weren’t fixed on one point in the distance. Maybe “timesinks” are where life really happens.

If we remove all the “unnecessary detours” in games that people consider a nuisance, what exactly are we “saving and optimizing ” that time for? When you arrive faster at treasure and glory, where do you go from there? And just how much have you missed on that shorter journey?