I had this long wall of text ready to publish yesterday, on how much I look forward to play future MMOs without the holy trinity – and then blogger ate my post and I couldn’t find any way to recover it – of course. *sigh* That convinced me I should rather be playing Rift than write silly posts, y’know basically a sign from above, and now I’m not even sure whether I have the heart to rewrite it all. I hate it when that happens, where’s the time machine when you really need it?

Anyway, there I was trying to break down Rift’s class system in a comprehensible way  to one of my mates the other night, feeling ready to jump off the next cliff after approximately 10 minutes. Yeah I get it, the class system is a little more complex than in World of Warcraft – that’s why it’s fun. But it’s really not all that hard to understand, a trained monkey could grasp the concept pretty soon. To which my mate then replied: “what about Warcraft players?”.

Before you reach the inevitable conclusion that said comment was actually offensive, it was made by somebody who’s played WoW himself for a long time – and arguing with such deprecating self-irony is kinda hard. I have also been told that I am made of pure evil for successfully luring people into giving Rift a go, making one of them buy an new shiny PC just to be able to run it properly, so apparently I don’t get to argue. Riiight, don’t blame me now, MMO players are all the same desperate bunch, muah muah!

I get where this is coming from though: when you jump into Rift, there’s all that talk of callings, souls, roles, subclasses, planar charges and ye olde Warcraft player that you are, you’ve simply forgotten all about how it feels to start a brand new game and that initial confusion is part of the experience (and fun).

There are currently a few Rift resources in the making, but nobody likes to go and search half-baked databases when starting off with a new game. Also: Wiki articles are often cryptic and have the potential to scare you off rather than to help – now that would be a real shame. So, what is it with this class-soul-role mumbo-jumbo in Rift? Here’s my breakdown in 3 easy steps.

There are 4 main callings or class archetypes in Rift: Warriors, Rogues, Mages and Clerics. This is the initial choice you will make when creating your character and cannot be reversed at any point in the game. Each of these archetypes offers 8 sub-classes or talent trees which are called souls in Rift.

Your very first quest at level 1 will let you gather your first out of 8 souls. Don’t worry about that choice too much because already at level 13 you will be able to get them all and switch around. 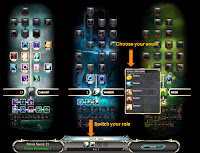 Your character can equip 3 souls at any given time. That means your talent chart looks very similar to WoW where each class has 3 trees to fill points in. The main difference is that you have 8 trees available in Rift and it’s your choice which ones to play with and when. The game wants classes to have access to a lot of variety in playstyles and encourages you to experiment and respec often.

So, if you roll cleric in Rift for example, you can play any combination of 8 souls: you can be Druid/Cabalist/Warden or an Inquisitor/Justicar/Sentinel – just to name two options. It’s up to you what “trinity” to set for. That makes for a stunning 56 unique build combinations available (more including PVP souls) per class. And then it’s still up to you how you spread your talent points within those combinations. Ideally, you still want to focus on one main tree at least, in order to get access to the powerful endtalents.

At some point you will tire of respeccing in order to switch or re-build your specs; you will want to have different talent and soul combinations ready to play, depending on whether you play solo, in a 5man or PVP. Every Rift class has variety of functions available, from tanking, to dps, support and healing. This is where roles come into play: a role is Rift’s equivalent to WoW’s dualspec, it let’s you save more than one talent spec at a time and switch between them easily, anytime and anywhere. Your first extra role will cost you 30 gold which roughly equals 30 WoW silver – so it’s very cheap.

You can both respec and purchase extra roles at your class trainer. Note that while you’re leveling up, you must buy your new skill ranks individually for each spec and can only do this while the role is active (so it’s a good idea to switch while you’re at the trainer).
Furthermore, you do not only have two roles available in Rift, but can get up to a total of 4 saved talent builds which you can re-name individually to keep track. This is another testimony to Rift’s class versatility and flexibility. Knock yourself out!

That’s pretty much it! Not so hard now, is it? If you’re still looking for more info on something, have a look at the following, more and less useful Rift resources and Wikis. Keep in mind that the game has only just launched while browsing.

If anyone is using different pages or has other tips in general, I’m happy to hear about them. I have not actually had the time yet to look into any Rift forums and I don’t even know whether there are official realm and class forums or not. Exciting times! ^^