While speakers don’t realize it anymore in everyday language, the German word for “disappointed” has a rather intriguing, literal meaning: it’s to be “un-deceived”. If we feel disappointment, it is generally because we were let down on our expectations – our hopes, dreams, illusions maybe. In any case, there was a deception of some kind involved and quite often it’s a self-created one as much as the other way around.

With GW2 finally at our doorstep and me still shocked that official launch time is set more in favor of EU folks than US (amagad I get to log on to GW2 for breakfast!) for a change, it’s sensible to take a moment and consider personal expectations. I spend a lot of time dissecting and criticizing single features and aspects of MMOs on this blog, so it’s probably hard to believe that I’m also quite the big picture person. I know exactly what I want from GW2 and my personal hopes for this game have already been half fulfilled in the betas. Lucky for me, GW2 offers a lot to explorers and lovers of the shiny!

For a while now I’ve had the feeling that player expectation towards upcoming titles has increased in significance compared to the olden days. Expectations have a tremendous power over individual perception and reception; more than that, they also have the potential to spread side-effects, for better or worse.

When The Secret World launched its free 1-month anniversary weekend two weeks ago, I ended up having a look at Funcom’s latest progeny quite unintentionally. I suspected that TSW would not appeal to me personally, for reasons of theme already, but I like a first-hand look at any game especially when there’s nothing to lose. Alas, rather quickly TSW confirmed my misgivings; I would never get even close to a well-rounded and fair overall judgement after such short a playtime, suffice to say though that I can only marvel at Funcom for their chosen business model, considering TSW serves a niche inside a niche and all past AoC baggage. I also didn’t like combat one bit and then there’s the looks of the game….and while you can disagree with me on style, no MMO launched in 2012 and coming with a key, sub and item shop is allowed to look like a Sims game! Complete and utter no-go in my world (I got a new rig for a reason!). If SWTOR got a beating for looking dated, it’s only fair that TSW should get one too!

That wasn’t the big insight I took from TSW though. Much rather, there was something very interesting going on in terms of player reception in this particular case – a case of a more niche and quite low profile MMO launch. Just to give one example of many similar echoes I’ve come across during the free TSW weekend, here’s an excerpt of a recent twitter conversation with two of my fellow bloggers, Belghast and Heather:

What I’m not implying with this is that either of them isn’t genuinely enjoying TSW, by now probably for many reasons. Assuming they are still playing, they most certainly have found enough reasons to retain them. However, these are two examples of what I suspect is quite a substantial group of players who ended up taking to a new MMO they had not followed much at all pre-launch, and who did not only find enjoyment despite that but maybe even because of it? Naturally, expectations (or the lack thereof) will not decide over the longterm choice to stay or leave a game, yet it’s intriguing they would have the power to influence initial impression so heavily. We all know how pivotal a time launch and also individual “entry stage” are for new MMOs.

Now, “pleasantly surprised” or “better than expected” aren’t exactly labels new MMOs usually thrive for but I still need to ask myself what is the conclusion of all this? And what does this potentially mean for game developers and publishers? That maybe it’s beneficial to hold back on too much exposure and heavy marketing pre-launch? That a low profile is preferable in some cases? Should developers start and spread their own false or obscure rumors about their game just so it reaches intangible cult status, luring a potentially bigger audience out of sheer curiosity? No really, I’m quite serious!

If we consider the last few weeks of the GW2 waiting rush, it’s probably safe to say that there is such a thing as too much exposure and for some players I am told, there’s such a thing as detrimental hype – to a point where omni-present talk of the same game becomes so overbearing it may even turn somebody off from buying the game at all. I don’t know how frequently that occurs, and personally I wouldn’t want to attribute a vocal minority of forum trolls that much power over my own game choices, but if a potential customer refrains from buying GW2 because of overbearing hype that can’t be in ANet’s interest. That’s not to say that they have any direct responsibility or means to change anything. It does shed some light on the power of expectations though.

I will also officially bet on this here blog that GW2 is never going to get the soft and benign player treatment for its no-doubt yet undiscovered flaws and failures, the way more low profile MMOs like TSW usually do. GW2 will be hacked into pieces mercilessly and with every conceivable double standard, simply for having been praised and expected so long and publicly beforehand. No doubt there are already some people lying in wait for that moment of grand punishment…like the resented, vengeful twin waiting for his one-minute monologue. I won’t comment on that but yeah, it does show us another shade of potential effects of expectations…

I mentioned feeling lucky before because GW2 could be an entirely different game, not catering to any of my very personal selling points. There is a beautiful world to explore in the fashion I endorse, there are undeniably wonderful graphics and music, quest and combat mechanics I consider fresh at the very least, plenty of cosmetic items….safe bets all of them. I look forward to enjoy this at my own pace and hopefully with the freedom to group up with any of my friends. Most of the aspects that are currently criticized or eyed with worry don’t interest me that much: I don’t worry about the guild system, dungeon loot, “endgame” or even PvP should it turn out to be lacking. I’m also not one to fret over bugs or imbalances so early – there’s time. Furthermore I consider the current bashing of the community very over the top; WoW was never a good place to go for forums nor general chat. That didn’t mean there weren’t cool people to be found on servers. Community is always also what you are contributing.

I’m going to play GW2 for my own reasons that may seem trivial to somebody else. Much of that enjoyment will be up to myself too which is what managing expectations is all about. I look forward to meet up with some of my old WoW mates so much it’s silly and for that already I thank GW2, for that long awaited opportunity!

How long will it all last us? I don’t know and frankly don’t care. GW2 doesn’t have to fascinate me for 5 years straight, I am no longer that gamer. Neither did I ever consider this the big, all-changing MMO revolution but as The Cynical Brit rightfully points out towards the end of his final beta conclusion, “a next evolutionary step”. A very important step at that – one that may impact on much to come. I care for this genre, I care for GW2 to be a solid success which I’m confident it will be. Mid-or longterm? I will probably get bored for lack of things to do and fluctuate more again between several games. So what? Even if I only got the famous 3 months of amagad-shiny-awesome-noob-time out of all this (which I doubt), it will be a hell lot more fun than I’ve had in a long time!

…With that I am off to the long awaited weekend and my Saturday morning launch. I wish you all the grandest GW2 head-start weekend and that you can enjoy this new MMO simply for what it is, unaffected and untouched by the backlash of other people’s expectations. I’ll see you and all your Asura Engineers on the other side! ^^ 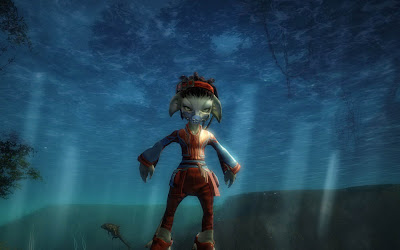