I’ve been in contact with several of my old WoW buddies recently who are teasing me back to Azeroth. It’s a completely different game than it was when I left in 2010 and from what I gather, the current expansion isn’t well received. At the same time, the pull of old friends is mighty and they seem to be enjoying the mythic content in the game. I am however still playing FFXIV and have only finished all the post-Shadowbringers patches last night. What a fantastic expansion this has been – I sincerely hope Endwalker can live up to its reputation!

Talking back and fourth with my buddies I’ve told them a lot about why FFXIV, in my humble opinion, is the superior game these days. Them being generally curious about it, that has led to some interesting discussions. One major point that seems especially baffling and inexplicable to WoW players, is the friendliness and casual attitude in FFXIV and especially its pugs. This is one of the biggest differences between the two MMOs and has been for a long time. Nobody really seems to be able to explain why.

My few ventures back into the WoW 5man pugging scene have been almost absurd. All of the groups were radio silent for starters. When I joined a party and tried to get a grasp of a new dungeon, half the group had already sped on to boss number one. Generally, the tank didn’t seem to give a crap if the healer kept up and boss rooms just lock you out these days if you’re late. To my big chagrin, skipping as much as possible within the dungeons has also become common place which leads to frustrating scenarios for newcomers. Again, nobody cares about that. It’s what’s made me quit GW2 back in the days and it’s equally bad design in WoW.

The difference to FFXIV pugging could not be more pronounced, as my screenshots above illustrate. These are not my ‘top screenshots’ by any means, they are in fact just screenshots of the pugs I did last night. It is common place for people to greet each other, tell if the dungeon is new to them, ask the healer if big pulls are okay, end runs with a GG or cheers. As a healer, I’ve literally been in groups where the tank apologized to me when someone died. This has been my FFXIV experience for over 6 years. To date, I have pugged hundreds of dungeons and had maybe three unfriendly pug experiences that I can remember.

So why is there such a huge difference between WoW’s and FFXIV’s community? On the surface, both games have the same approach to pugging, with dungeon finders, ilvl-requirements and cross-server grouping. So it cannot be explained by these game mechanics. Personally, I believe it’s many design factors, some more subtle than others, that directly and indirectly turn FFXIV into the friendlier environment.

The daily pugging system in FFXIV is the heartbeat of many players’ every day routine. Running dungeon roulettes for marks always awards the latest token armor currencies (which ranks between normal raid gear and savage raid gear) and serves as a fantastic counter to content decay. There is none in FFXIV; the majority of dungeons, trials and raids get run every single day by thousands of players. This ensures new players can get through the main storyline of the game, while providing everyone else with rewards as well as varied locations. Needless to say, the routine factor makes people pretty laidback about pugging and most players are familiar with all the dungeons in the game. Dungeon design is mostly straightforward and linear, so there’s not much to skip along the way and they generally take no more than 15 minutes.

Among the things that FFXIV excels at, playstyle variety and social engineering are center. There are numerous non-combat activities as well as vast solo play content that attract a very wide spectrum of players. No matter your preference or age, FFXIV offers plenty of options for you to pursue activities and get great rewards. For this reason, the community feels very broad to begin with and endgame feels flat. Newcomers have various ways to get into the game with combat tutorials, mentoring systems and NPC parties to get them started if they so desire. New players are marked with the sapling icon and dungeon runs award player recommendations for friendly or helpful behavior. Wherever the l33t competitive players are in FFXIV, they make a tiny percentage and keep to their dedicated static groups for ultimate content.

Speaking of the l33t kids, Square-Enix does not officially allow DPS meters in FFXIV. I have never once encountered anyone talking about DPS or spamming numbers in any type of public chat, as it risks getting reported. While DPS mods exist and are quietly tolerated, players don’t talk about them publicly and keep them inside their dedicated FC and static groups. Which is exactly where meters belong! The same goes for achievements which are not a relevant thing in FFXIV. Nobody inspects you to decide whether they’ll have a good pug with you or not. 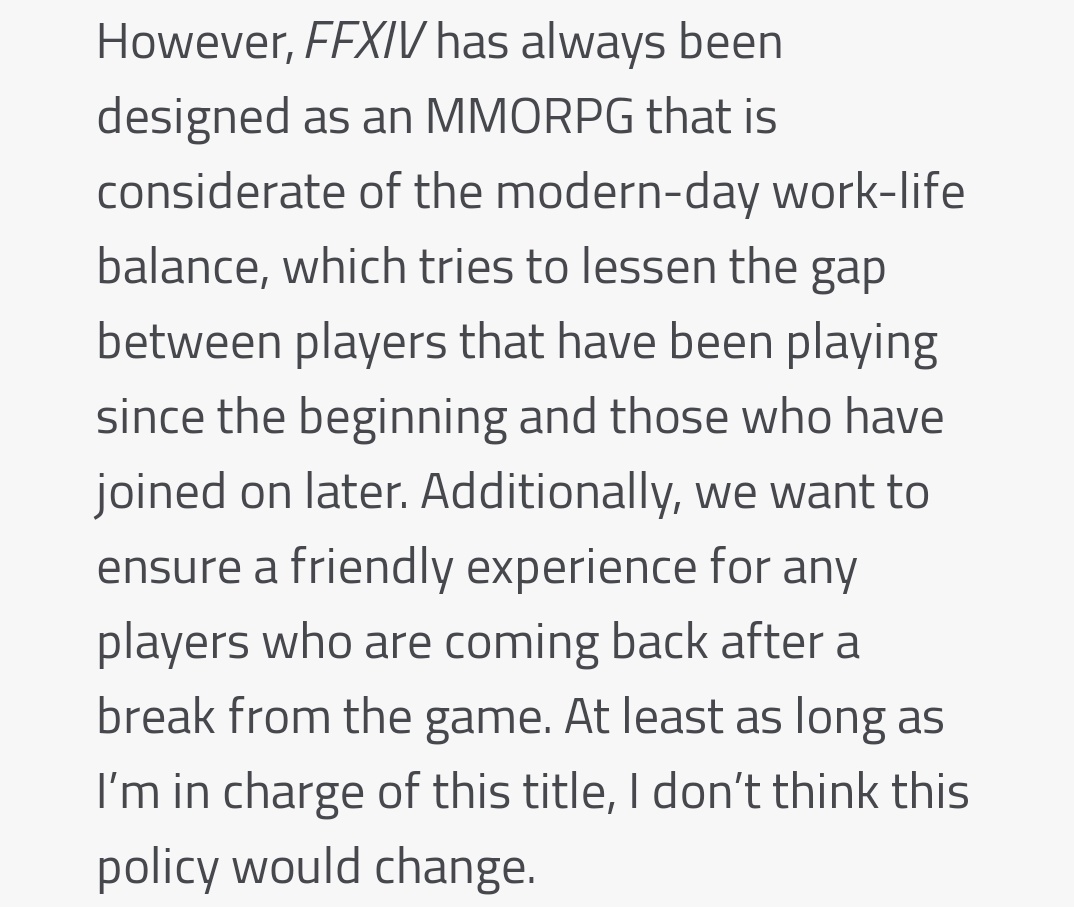 Last but far from least, FFXIV is a Japanese title with a Japanese dev team. This cannot be discounted by any means and gets very visible in the great three-part A Realm Reborn documentary on the rebirth and re-design of the game. Yoshi-P and his dev team approached FFXIV with a certain ethos and cultural background that values social conduct and boosts certain behaviors in the game as well as shaping communication. Overall, this dev team still feels very committed and emotionally invested in the game whereas WoW is long past its prime and A- and B-Teams. My heart legit broke into pieces watching parts of this last FF Fan Fest.

Your mileage may vary

It’s a mixture of things that make MMOs enjoyable to us. When it comes to providing ample opportunities for casual and fun content as well as accessible dungeons, FFXIV hits the sweet spot for me. When I log into the game and sign up for a couple of roulettes, I am guaranteed to wind down and enjoy myself after a long day of work 99% of the time, rather than being wound up and frustrated by a stressful group or toxic player. The game won’t force me to join elite content for great rewards and there’s no ramp-up of systems with unlocks and pre-requisites that push me into one linear grind. If you don’t feel like running dungeons, there’s plenty of other things to do and the game is good at catching you up between content and armor tiers. While it’s far from perfect in all respects and I’ve had my gripes with it in the past, I guess it’s safe to say I won’t be converted away from FFXIV any time soon.