I’m not sure exactly what caused the recent stir of blogging-death related posts these past two weeks, or if it’s even a thing. Bloggers tend to magnify issues by joining in to comment or just muse on a matter. It doesn’t really mean everyone’s worried. That “golden age of MMO blogging”-theme has been spooking around ever since Cataclysm latest. So, let me just get this out of the way: I am not worried. It just so happens there’s a few more voices on this you shouldn’t miss.

Recently three more MMO bloggers, namely Jeromai, Azuriel and Jewel, have joined the debate and made some excellent points each on why things are starting to sound very doomy-gloomy and largely disproportional in some cases. Let me recite one of my favorite lines in this context: “…I’ve thought myself out of happiness one million times, but never once into it”. Let’s not overdo it with the next generation and social media anxiety – you don’t wanna start sounding like your grandparents, do you? So, let’s highlight just a few tiny bits from the links above –

There are I few issues I think that are maybe giving this impression. Firstly is that some of the old cranky dinosaurs of the blogging world have been retiring in recent years, some that were part of those early communities. [Jewel]

Do you know what the upcoming generation’s great crime is? They have a choice, whereas we did not. Do you think the New Blogger Initiative failure rate of 73% is a new phenomenon? It is not. In fact, I was pretty surprised the number that survived was that high. Blogging is hard. [Azuriel]

Some grew up and got older and prioritized other things to do with their time than write blog posts – like start a family, begin a new job, play non-MMO games, continue playing MMOs but not bother to chronicle or document it. – The others, well, they haven’t gone anywhere. [Jeromai]

I don’t know about you but I think it would have been incredibly boring to just have one primary game most were talking about. Now we have multiple opinions about a variety of subjects spawned on by new experiences and it is an exciting time to be a part of. [Jewel]

Things aren’t worse; things are different. To some, maybe different is worse. In which case, you probably chose the wrong genre of game to write about in the first place. [Azuriel]

In short, if you want a blogging community, it behooves you to form your own. Go visit and bookmark your favorite sites to read and leave a comment here and there. Develop your own circle and fellowship. [Jeromai]

About everything that I believe about this current, colorful and diverse age of MMO blogging (and what makes a community for that matter) is covered in these three articles. As Shintar points out elsewhere in context of MMO players crying for community in games, there is something comparatively weird about beweeping a collective that you are still part of. Don’t want blogging / the MMO blogosphere to die? Keep writing!

[…]I wrote elsewhere that I personally favor today’s diversity among bloggers. and even if MMO blogging becomes smaller, that doesn’t have to be worse, either. do we need 100% growth for growth’s sake? or could it be that the blogosphere grows closer together that way, making for better discussions at times? all things pros and cons.

This was always a niche and as you said too, blog ‘failure rates’ were always high. maybe the biggest contribution to this topic from our side is to not stop blogging just because we believe others stop blogging. 😉 my personal blogosphere corner is only marginally smaller than ever. [Syl]

My blogroll has shed a few feathers in the last three years, mostly due to retiring WoW bloggers who either felt like WoW was dying or realized that they had no more to say about it. Now I can’t guess what other bloggers want from their blogosphere; I can only point out what it is I am looking for. For me, it’s always been about exchange – about the hot cross-blog debates, about shared topics, about great discussions (you guys are awesome!). I don’t require a hundred other bloggers or commenters per topic for this, in fact that would be very hard to manage (although you can bet I would try and reply to every comment). The great majority of my visitors per day are silent readers, as I am sure they are for all blogs. As far as reciprocal relationships go, I can maybe keep track of dialogues between 30 or so different people. Does it matter how many more exist besides that? Were MMO bloggers ever so much more than a tiny niche, really?

If we keep with the numbers, blogs are about being read first and foremost. Any more visible connection is the amazing icing on the cake that keeps so many of us going. And I don’t detect a decline of general interest or visitors on this or any of the other active, general MMO blogs on my blogroll. No more than is warranted by annual summer- and release low, anyway. I’ve started dabbling with youtube more recently (and it’s really just for fun) and I’m having the greatest time with the Battle Bards podcast. More social creative media are awesome in combination with blogging. As for twitter, I’m sorry I didn’t join sooner. It has made MMO blogging that much more personal.

There is room here for everybody. There is a community you can carve out for yourself and reach out to. There is an audience for every type of blogger. The same was true ten years ago – only, there was actually a lot less MMO audience around than there is today. As for WoW’s hayday well, fewer blogs on the same topic mean better chances for newer bloggers to get noticed.

The community is you. It’s us. If we keep writing, connecting and acknowledging each other, it’s us who decide what happens to the MMO blogosphere in the future. And it’s also the only way of telling aspiring bloggers than this is still very much a venture worth pursuing. Well, I think it is. 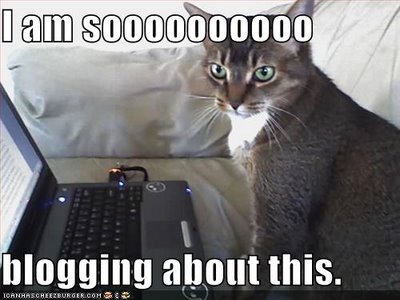 Happy weekend to all you MMO bloggers, readers and commenters out there. Here’s a silly picture of a cat for you! It’s Friday after all!