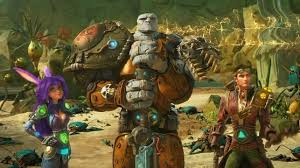 A while ago I was working on a longer writeup concerning Carbine’s upcoming, and to this date still somewhat below-the-radar Wildstar MMO and how implementing Bartle playstyles (“paths”) for questing is one of the more ingenuous ideas I’ve come across in what otherwise appears to be yet another classic themepark formula. I had some nifty reviews and videos ready to elaborate on the concept – but then I lost interest along the line, not least due to the overall cartoony look of the game. As shiny and polished as Wildstar’s graphics may be, I simply don’t see myself seriously playing goofy Disney characters in candyland. That may be too harsh a judgement right now, but the developer keeps emphasizing the focus on being a “friends&family” game which, while no issue in itself, has me personally skeptical about things like gameplay or content difficulty. I have a feeling I won’t be this MMO’s target audience and that’s actually fine by me.

Yet, there’s certainly more to say in favor of Wildstar; for example the brilliant player housing concept announced recently, brought to my attention thanks to Bhagpuss. WOW!!! I have been waiting for non-instanced player housing now since….Ultima Online probably. I crossed some guild towns in Age of Conan but those involve tremendous amounts of time and guild dedication, not to speak of an endless material and harvesting grind. No, I’m speaking of your very personal home the way we got it in Skyrim – and how awesome would that be for an MMO? This far, we kept hearing the same excuses from most developers: space issues. Can’t plant personal homes on the servers….y’know, virtual worlds have serious space limitation issues!

Be that as it may, Carbine actually used their thinking cap and came up with a splendid solution that makes use of the endless possibilities of virtual spaces – flying islands! That’s epic WIN for you, short and sweet!

Still, my overall impression of Wildstar remains; few innovations aside, it looks the way WoW should be looking today and feels like the next evolutionary step for players who are still attached to Blizzard’s franchise and overall concept. This is especially true for the combat too which is good old, conservative holy trinity between tank, healer and DPS (rejoice ye grumpy healers!). Wildstar’s launch is currently still a secret but expected to follow either very late in 2012 or more realistically sometime in early 2013. That makes me think it may launch perfectly around a time when WoW players are feeling “done” or jaded with their first look into MoP; some of them may actually start looking for something a little shinier, with few new ideas but not too many fundamental, revolutionary changes.

Given that Blizzard will never feature a WoW “sequel” and that Titan will be vastly different, there’s definitely a market share to grab for the first developer that makes a serious attempt at Blizzard’s cake: a wide-spread target audience, conservative group setup, a shiny cartoony world, while also introducing more novel features like (semi-)active combat , questing archetypes and awesome player housing.

If I was still a vivid or even mildly interested WoW player today, I’d say Wildstar is exciting news for the current WoW crowd out there and – should MoP fail to enthrall – a silver lining on the horizon?
Either way, I’ll keep a closer eye on this title from now on, if only to see what other surprises Carbine will conjure up until next year!