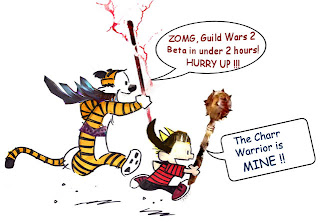 Just when I had tweeted the above picture waiting on the GW2 beta on Friday evening, ANet’s servers suddenly went live – over one hour before official beta start. I am tempted to call this a smart move on their side, ~1mio people trying to log on during the same, small time window = not fun.

Anyway, I was an early starter and a rocky start it was! After so many hours of disconnecting and not finding your mates because of cryptic overflow mechanics (I CAN’T SEE YOU!), I went to bed hoping for some fixes. It’s certainly been a good stress test and ANet were fairly responsive in getting the worst issues sorted a.s.a.p. which cannot have been easy. I skipped most of Saturday due to lag issues but finally today, servers were stable and I’ve had ample time for more detailed impressions.

I’ll start with my only, big annoyance and say that I am very unimpressed with the overflow server mechanics. It’s all beta state so I am not screaming in terror, but it was a big negative that for 95% of my playtime up to now, I was unable to group up with friends. Some of us were constantly sent to overflow servers (different ones too) while others were not – usually without any indication given. I am missing respective indicators on the map/zones and most of all: people who are grouped up should be able to join each other! This is a vital thing in a game that pushes cooperation as much as Guild Wars 2 does, so I hope next beta come they will have solved this.

I’ll also admit that I was surprised to see the overflow mechanic pop up for every zone in the game. I didn’t expect zones to be gated via loading screens and from an explorer’s point of view, it’s rather disruptive to one’s game-flow to be told “sorry, that zone is full”. I’m sad that a consistent world was not an option. Personally, I am capable of judging whether a zone is too full for questing myself. I would still like the choice to travel through though or meet a friend there quickly, and not be told to queue up or go to the overflow. I see the advantages in terms of lag or impatient players doing quests – however to me, it is more important to be able to travel a cohesive world without loading screens and queues. Queues will improve later no doubt, still a minus in my books.

I’ve spent substantial time off the beaten track, trying to get a sense for the scale of Tyria. As expected the graphics are beautiful, with elaborate weather and shading effects, banners flowing in the wind and dancing snowflakes. The starting areas are somewhat claustrophobic in space and I have yet to be overwhelmed by a great vista or endless plains; but then I have maybe seen 5 zones so far. The environment is not as accessible as for example in Rift (where you can climb pretty much any peak), but there’s a lot more going on under water than usual, inviting players to test their underwater combat skills. The waypoints are there in abundance for the lazy – having mostly soloed so far however, I was not pressured to use any. This early into a new game, you gotta be particularly goal-driven to already rely on teleports…

Explorers get plenty to do and zone loading screens encourage them: four indicators per map will keep track of your zone progress, points of interest discovered and events partaken in. Special challenges await you when attempting to earn extra skill points. However, a word of caution to the eager traveler: mob level in GW2 is to be taken seriously! As an elementalist I was hard pressed to kill foes 1-2 levels above me and I certainly didn’t manage to kill groups. I died quite often, also because I blundered into areas prematurely which happens easily. If you travel too far ahead, you will get feedback immediately!

The dynamic events (heart shapes) at lowbie level work as intended: assisting others is effortless, rezzing dead players (indicated on the world map) is fun and participation is always rewarded – in fact you gain most EXP by assisting and joining events, not farming or grinding mobs all by yourself. I second Keen in that the quests could be a bit more imaginative than gathering crops and throwing snowballs at children, but then we’ve seen very little. Sometimes these events will also lead to further steps and more demanding objectives. From what I’ve seen of my personal storyline so far, quests are more engaging and I look forward to see my path unfold.

I am enjoying the combat mechanics in GW2, as I knew I would. Auto-attack and circle strafing take some getting used to; due to the mobile combat style, you will easily reset mobs getting too far out of range. It’s a wonderful feeling to cast while running though, I love the elementalist’s mighty AoE effects and different attunements and weapon abilities to choose from.

A second look at customization

Naturally, I also spent some time scrutinizing the Norn female character creation first-hand. It’s funny how impressions can vary once you get to be your own skipper. For one thing, there are not as many facial choices as I thought there would be; the individual sliders are also more or less effective, depending on your choice of face. But judge for yourself in this quick “before and after” picture:

There are a total of 15 Norn female faces currently in the beta, along with 21 hairstyles. For the human females, there are 18 faces and 23 hairstyles. However, the Norn choices have suited me better in every aspect: they have more diverse body options, nicer (especially many longer) hairstyles and colors available for hair and eyes. Make-up is a deplorable given, although degrees may vary. For those who asked about more mature or scarred faces, there’s in fact one older looking face to be found for the humans (if you expand the image you can spot some wrinkles) and one scarred face for the Norn (also the Norn get tattoos):

One thing to take note during customization is that once you’ve made individual adjustments to one face, the changes will appear on all the presets when going back. This way, you are instantly presented with a whole “new set” of variety which might help you find that unique look for yourself.

After a rocky start, the GW2 has been a lot fun; so much to see and explore and especially so much to learn! Guild Wars 2 IS its very own game and that is good to remark at this point! You will not be tempted to compare this MMO to other games you’ve likely played in the past.

ArenaNet will certainly need a few more months (so much has become clear) to take care of some balancing and technical issues now and there is missing polish where ingame functionality (for example on guild management level), menu options and indicators are concerned. Early overflow gripes aside, I have not come across any major disappointments or annoyances though. I think we can agree that GW2 is a safe bet for anyone looking to immerse himself in a fresh and original MMO world this year. I’m off to play some much anticipated WvW now – more on that another time!