When I started writing this article some while ago, it was called “10 ways to spice up MMO combat”. As these things go sometimes, it’s grown considerably in size ever since, with more and more ideas accumulating in my draft that I wouldn’t want to abandon. Well that’s that – I guess we call it proof of how badly MMOs need to improve one of their most centric features: battle.

Now, I don’t claim that any of the here suggested features or effects are new; nothing’s new under the sun, everything has been done somewhere, sometime, in an online or classic video game. Some of it we’ve sadly not seen enough of, some has never been done properly or very poorly. Not all of it is applicable to every type of MMO or necessarily in combination – but these are all features with some great potential to make future MMO combat more tactical, cooperative and dynamic in my eyes. And yes, more action based.

“Actual fast-paced combat opens (or really, re-opens) the doors of possibility when it comes to MMORPGs. If you don’t have to spend an hour theorycrafting, respeccing, buffing, and finally, dice-rolling your opponent to death — and instead could catch him unawares and simply send him packing with a blade to the throat — you’d have free time to do things other than combat.” [massively]

Many of us probably agree with the Massively article in that it’s time to move away from lengthy battle preparations, clicking ability bars and waiting on cool-downs, as you stand beside a few more people. Or as Epic Ben (whose page has sadly disappeared since?) put it a while back: “raiding is like synchronized swimming”, MMO combat is often static, repetitive and not exactly interactive. While it will never be quite the real thing (and certainly shouldn’t in every way), there are ways to make virtual combat feel more realistic, alive and exciting. And there are genres that can still teach MMORPGs a lesson or two.

So, here goes – I’ve tried to create some rough sections and to keep detailed descriptions short. I am also feeling lucky today and will just assume you know exactly what I mean by my weakly attempts to name and simplify complex mechanics (y’know, be creative!). In hindsight, I also realize I utterly failed to create any logical order. Good luck!

26 Ways to spice up MMO combat

Well, have I missed anything you think should be up there? Where do you see the biggest difficulties?

I know that quite a few of my favorites will be featured in GW2; I don’t wanna go into another hype-stage at this point, but I am greatly looking forward to class & profession combos (which I loved in FFXI), terrain and movement dependent spells, small health pools and health deficit effects – and yes, losing the trinity of course (even if that last bit is still awaiting full confirmation).

In general, I think we need MMO combat to return to a more dynamic, cooperative focus rather than a group-setup or spec-focused one. Let the actual teamplay, group tactics and performance matter; allow more randomness (for more situative reactions), create more need for control and pro-active play (as opposed to reactive/passive with heavy healing) and more need for situational awareness. Let our worlds come alive; let our opponents act smartly or erratically, let us find different answers to the same problem. Let us care less for stats, procs and cooldowns and more for general timing, synergies and spontaneous action.

Most of all: challenge us, so we may rejoice in our victories! I think we are ready for the next chapter. 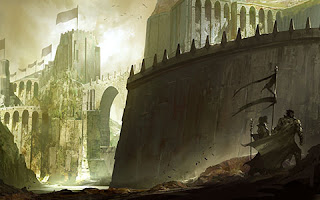