As more and more feedback on this past GW2 beta weekend is surfacing on blogs and official forums, it gets apparent how different players experienced certain aspects of the game, such as the events, personal story, pacing and leveling process. What becomes all too clear too is that while there are still issues in these departments, many players struggle more with their own mindset, habits and internal “MMO programming” than the game itself. They ask for the kind of guided ride and road to success that is characteristic of WoW’s questing model where it’s hard to go wrong and the game will always tell you where to go next. 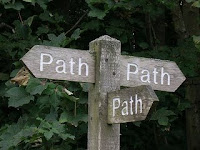 GW2 isn’t that kind of MMO. It’s nowhere near a sandbox, but it does return some agency to the player and asks him to find his own adventure. There are different paths to success and while the heart quests are in fact ordered by level, you can easily wander off and lose yourself in other activities. Off the beaten track, players will find surprise and wonder that are easily missed on the highway. To some this presents an overwhelming sense of freedom and disorientation at first. I would claim that this is only temporary – but it’s strong enough a feedback that many bloggers have recently asked the question of whether the playerbase can handle different? Tremayne has gone as far as stating that if it does not, that would be a grave setback for the evolvement of the entire genre. I happen to agree with him.

Azuriel argues that part of at least his own feelings of disconnect spring less from the novelty factor and more from ANet’s failure to accomplish a more open and free playstyle fully: why design a guided personal storyline that is not in sync with the new questing philosophy? And why indeed stick to a leveling system at all, instead of skill-based progression? I have asked this last question before and personally I would have preferred not having any levels in GW2. It seems to run contrary to the game’s overall concept.

Be that as it may, I would like to take the opportunity to point out a few ways of gaining experience points in GW2 while you’re engaged in PVE. I’ve read comments of players claiming that you need to PvP or engage professions in order to keep up a good “speed” or that they were forced to constantly repeat the same events; well, I cannot confirm any of that. There are possibly pacing disparities between some of the maps (apparently Queensdale has such issues), but there are still many more ways to gain experience if you make use of them. This won’t be big news to seasoned MMO veterans, but may be useful to those asking for guidance.

Ways to gain experience points while questing in GW2

The following pointers are based on my own beta experiences. I am the errant traveler / explorer type who likes not to focus on getting the job done as fast as possible. Coincidentally, I never had pacing issues this beta or the issue of not knowing where to go next – mostly because there was nowhere I needed to be. I did plenty of heart quests and events but also general exploration. I did not PvP once nor look into crafting. Here’s what I recommend instead –

1) Zones consist of more than hearts
While the heart quests give you a general sense of direction and offer useful rewards, they’re only an excuse to be at the right place where many events can happen. I found the heart quests rather boring and trivial compared to the rest. If you’re hunting EXP, keep in mind that zones offer many more points of interest than just hearts. Do the trait point challenges, check out special sites and also discover all the waypoints – they yield EXP!

2) Joining / Assisting in ongoing events
All events can be joined at any time and rewards will be dished out according to participation effort. You do not need to wait for an event to re-start, although you are free to repeat them (hearts are not repeatable). Likewise, you can join other players in killing mobs and get EXP for that – grouping is not required.

3) Following through a chain of events
Heart areas have the tendency to literally “be at the heart” of different events being triggered all around them, at various stages of progress. Spend time in these areas and check them out. Often events will continue with a next step or then suddenly the quest NPCs are attacked and offer a next chapter. This can easily occupy you for 20 minutes or more and lead all the way to killing a big baddie with fifty more players.

4) Returning to / repeating events
You may repeat events for EXP. Besides that, it makes sense to return sometime because there’s always a chance for more to happen or to experience scenarios you had missed the first time around. When I visited Hoelbrak and took this picture, I had no idea that other players had previously fought to restore that statue (thanks Rakuno for pointing this out!). For me that means I will be back to see that part of the event myself.

5) Resurrecting allies
Over the course of events many NPCs will die, as much as players. Ressing folk on the way yields plenty of good EXP, in fact more than if you had just killed a mob instead. It is also recommended to res NPC guards and defenders because they will support you in freeing areas or beating bosses.

6) General exploration
Like for most MMOs, wandering around and discovering all parts of a map yields good EXP (and achievements). Don’t forget about cities here and their numerous waypoints. Hunter made a great overview of all the jumping puzzle sites he discovered this beta – did you happen to find any yourself?

7) Gathering / crafting
I did not personally look into crafting yet, but while you’re out there doing events you might as well use nodes or gather herbs on the way. This is not the competitive nightmare it is in other MMOs and is basically easy additional EXP.

8) Personal story
While the personal storyline has some issues at this stage, for myself mainly in terms of difficulty / balance, following through as far as you can yields both EXP and rewards. It is possible to come back later and finish off with more ease or to share your personal scenarios with party members. They will be able to assist you in funny ways. If you are clearly too low to beat the next chapter, the quest tip will say so.

…And that’s pretty much it. Keep variety in your activities and “grinding mobs or events” should be the least of your concerns. Wander off – albeit not into higher level areas. If you still feel bored where you are, take a portal or waypoint to a different map; new hearts, events and trait points await! And lots of EXP for the weary.