There is one thing I am still waiting for in the world of MMOs. Okay – that is not quite true, there are a good few things I am expecting to see developers change in the future. One particular aspect however, has been gaining ground and speed there lately: namely the removal of the classic expansion model.

If I consider some of the biggest negatives MMO developers and players currently suffer from, it’s the ever-increasing pressure to deliver content fast vs. beating it, the extreme between players with not enough time to experience new content  and waves of un-subscribers towards the second half of an expansion-cycle. We all know at least some of these feelings: the race right after an expansion or major content patch hits. Then, the inevitable monotony and burnout hitting raid guilds and players at later stages, the “been there done it all”, driving some into creating yet another alt and others into canceling their sub altogether, waiting on the next installment.

And when you think about that, you realize that it’s quite an unnatural flow of things: a disturbance to the consistent and long-term enjoyment of a game. The “content peaks” delivered by traditional expansions create highly negative side effects, not just for the player base but the developers. So, why keep clinging to this model?

My main grief with expansions is their very situational concentration of a truckload of new content on one arbitrary and artificial moment in time – funny enough called the “release”. Players will wait 1-2 years for that monumental chunk of new content to arrive, all its ground-breaking changes and additions to the game delivered in one, fatal strike. The wait time drags on and gets tedious, the expectations are high. Some players cope by rolling alts or going on preparation sprees, others fall deep into “player depression” and “identity crisis”, leaving their guilds, canceling their subs.

The change of emotion that finally follows on arrival is extreme: players go from utter boredom to an almost hysterical rush to take in as much of the long-desired content as possible. Between those two points in time, we have a gradually plunging curve, only ever lifted by a major content patch or two (if such exist). Make no mistake though: the first quarter into a new expansion is peak time. Things go steadily downhill from there, on an individual level as much as overall sub numbers. Every time, every year, the same story like a groundhog day – 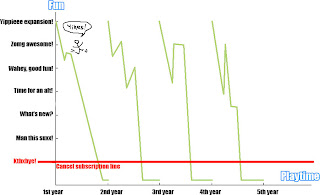 Now let’s assume developers decided to get rid of these opposite poles entirely: let’s assume that instead of featuring virtual coitus, erm release, every 1-2 years (few content patches included), they would rather aim to create a more natural and continuous flow of events and change by releasing regular patches on a 2-weeks base. Every other week, something in your world would change, get added or removed. It might be small things like a flood destroying parts of a map. It might be big events like a new quest hub being installed or a new dungeon. The frequent patching would allow developers to create an atmosphere of a living, breathing story where things happen constantly and where the environment (both NPC and PC) reacts accordingly, more like to our real world. There is never the one, big traumatic change but a dynamic world that is being re-shaped all the time, like a book with endless chapters.

How exciting would that be! To log in every other Wednesday, knowing that something has happened somewhere in your world! Maybe even uncommented in patchnotes at times. Sometimes big, sometimes small. Sometimes an isolated event, sometimes an ongoing number of chapters. The world would feel more alive and relaxed because change happens gradually. The game won’t rush ahead of you, leaving you behind. And it won’t just stop at some point, leaving you longing for more – 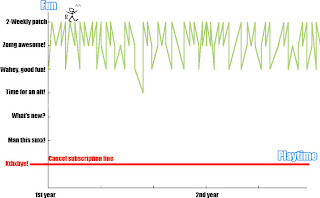 Not enough, along with this change in game flow, a long list of negative effects would shrink considerably or fall away entirely. Things that used to unsettle and spoil your fun in the game:

I remember how underwhelming player reception was in places for WoW’s Shattering in 4.0.3.; pretty much the entire world as we knew it got revamped in a swift strike, and yet there was little orchestration or preparation beforehand. Few earthquakes aside, it was certainly no thrill. Then, we did not get to be present when it happened, either. We got to log back later, presented with a grand Fait accompli that didn’t make us feel like a part of the world. Expansions often feature drastic and overwhelming changes and additions like that which simply feel un-immersive. Getting to read huge walls of lore later on is not the same as experiencing a process.

I want to feel part of the world I play in. I want to be included in a continuous and ever growing story. I want change happening all the time, not every 1-2 years in traumatic leaps. I want stable and lasting fun, not a curve that goes from player fatigue and long wait times to over-excitement, before tumbling back down into the valley of tears. I don’t want to regularly un-subscribe from the MMO I am playing because it’s delivering content in situational peaks. Surely, developers would wish for that too?

Why don’t they do it already?

If you consider Blizzard’s ongoing (failing *cough*) effort to create a game that keeps a tight, exciting leash on its player base through an unebbing flow of fast rewards and achievements, you could think breaking the “peak-time” expansion model would follow the same strategy; after all, what better way of keeping things fresh and interesting than releasing new bits of content every other week?

Is it a marketing thing? Are expansion modules so crucial a selling-point for recruiting new customers? Surely, it can’t be the retail factor – it would have the smallest part in overall profits generated via subs, virtual goods and merchandise. So, attracting potential new customers with announcing your next big hit, I can see that as a factor. As far as I know, Blizzard added a substantial amount of new subscribers with each of their expansion releases, heavily marketing for “The Burning Crusade” or “Wrath of the Lich King”. I wonder though: how many effective customers have they lost since Cataclysm’s launch – does the strategy really work forever? And how much sub time do they lose every year because players unsubscribe regularly? It would be interesting to compare the potential losses and gains here.

It would be interesting too, to hear a developers point of view concerning the planning, administrative and actual design efforts (and deadline pressure) that go before a full-scale expansion. Have them compare the effectiveness of such an undertaking to a large number of mini-patches allowing them to break down change and innovation, focusing on one chapter at a time. Somehow I feel that from a pure design’s point of view, it would be more controlled and rewarding to go with the second option. Safer in terms of devastating bugs and far-reaching miscalculations, too. I am of course entirely speculative here and as usual happy to be educated otherwise!

I am no design or marketing and investment specialist; I would still claim however, that a content delivery model creating the more lasting effect, the stable fun and entertainment and the more dynamic and immersive flow of content for a player base, bests a system full of highs, lows and break-ups. That is from my humble point of view – from me, the paying customer. Somehow I have the feeling I am not alone.

So, who will step forward and show us how it’s done already? I am waiting!

P.S. I love charts, don’t you? I have actually used them in the one, proper way in this article – serving and exemplifying my personal message and meaning, rather than basing on existing numbers. It’s called journalistic freedom!